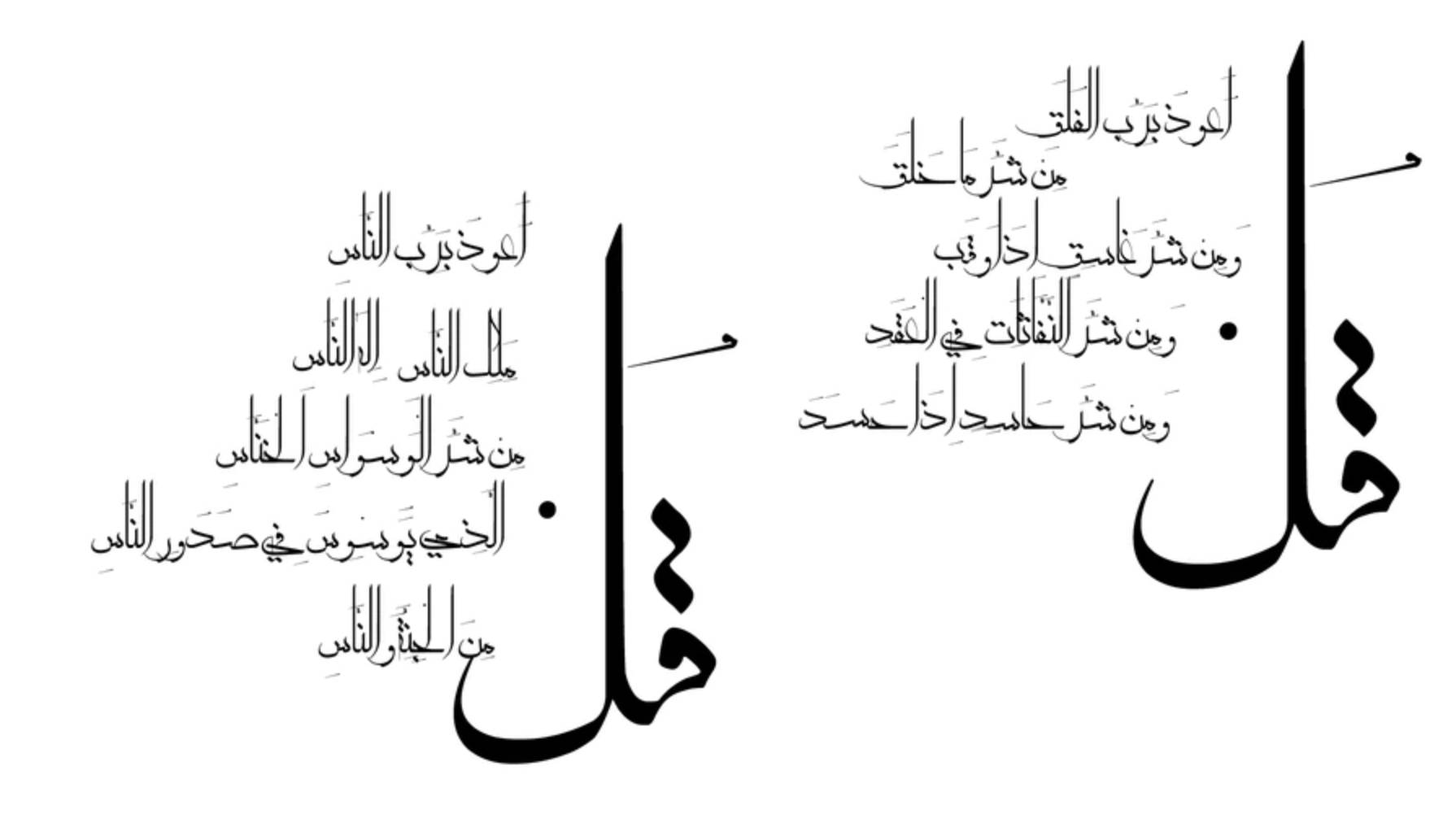 The existence of evil in the world is a fact, according to Abu Mansur al-Mâturidi(d. 333/944) and Fahreddin er-Razi (d. 606/1210), two major Islamic scholars. However, based on the structure of the world and the nature of human beings, there is an interpretation of this evil. The 113th and 114th suras of the Quran are referred to as " Muawwidzatain (Mu'awwidhatayn)," which means "protection and refuge from evil." In the Surah al Falaq, everything created is asked to seek shelter in the Lord of Falaq from the darkness of cruelty and ignorance that oppresses, from the evil deeds of those who tie knots and jealous people.

The ways of protection from the evil of the jinn and the human devil, who wait in ambush and instill bad thoughts, are mentioned in the Surah an Nas. On the other hand, the "Lord, Melik and, God" qualities of the Creator in whom we should take refuge from all kinds of evil are explained. In these chapters, the conception of God, who creates all kinds of good and bad deeds that can happen to people, who makes all beings live in the best way with His mercy, and who rules everything, is presented to the comprehension.

According to a narration, the chapters of Falaq and Nas were revealed together to break the Jewish curse cast on our Prophet (PBUH). According to the tafsir scholars, a Jewish boy assisted and served the Prophet sallallahu alayhi wasallam. The hypocrite Jew enticed him, and he brought a few teeth and hair from Rasulullah sallallahu alayhi wasallam's comb. On a thread, the Jew tied eleven knots, each with a needle. He then wrapped it in a male date palm tree pollen skin and buried it under a stone in a well called "Zervan." For this reason, the Prophet (PBUH) fell ill. The hair on his head spread and spread out. This continued for six months. The Messenger of Allah (PBUH) started to melt. He didn't know what had happened to him, either.

Two angels appeared to him one night while he was sleeping. One sat near His head and the other near His foot. The one sitting near his head said: "What's wrong with this man?" The other said: "Tubbe was made." "What is Tubbe?" the other inquired. The other replied: "It is magic." The other asked: "Who has worked magic on him?" The other replied: "The Jewish Labeed ibne Aasim." "What material did he use?" he asked. "A comb and the hair stuck to it," he explained. "Where is that?" asked the other. "It is wrapped in a pollen skin of a male date palm tree kept under the stone stepped while water is drawn in Zirvan well," the other replied. “O Aisha, do you understand?” the Messenger of Allah (PBUH) asked as he awoke. “Allah Almighty informed me of my illness. " Then He sent Ali, Zubayr and Ammar bin Yasir. They drained this well. It was as if the water was like an aged grape. Then they lifted the stone and took it out. They saw that the comb and the teeth of the comb of Prophet Muhammad (PBUH) and found the magic with 11 knots. Thereupon, Allah revealed the Surahs of Muawwidzatain. As the Prophet (PBUH) recited each verse, a knot was untied. And thus upon recitation of the total eleven verses all the knots opened, and suddenly a burden-like heavy load was removed from the Prophet sallallahu alayhi wasallam. Gabriel started to say: "I am treating you in the name of Allah. May Allah heal you from all your afflictions, from those who envy you and who cast the evil eye on you." They then proceeded to say: "Shall we injure the wicked's head, O Messenger of Allah? Shall we kill him? "The Messenger of Allah (PBUH) said: “Allah has given me healing. I dislike to let evil spread among my people" This behavior is also due to the gentleness of the Messenger of Allah (PBUH). " (Bukhari, Tıbb: 5766; Muslim, Salam: 44/2189; Beyhaki, Delailu'n-nubuwve; Vahidi, Asbab-i Nuzul; Suyuti, Asbab-ı Nuzul Lubab-ı Nukul)

The majority of Ahl as-Sunnah scholars believe that the Prophet's enchantment and his being influenced by it has nothing to do with the verification of polytheists' claims. They think that there is an attribution of insanity to Prophet Muhammad (PBUH) in these allegations. Furthermore, even if the Prophet was affected by the spell, his Ismah title is unaffected. Because the spell affected him not by the identity of the prophet but because he was a human being. The Prophet, as a human being, gets tired, sick and, wounded in wars like other people as well; these do not damage His attribute of Ismah.

Even if it was mentioned in authentic sources, Ibn Bâdis claimed that the news about Muawwidzatain's revelation following Prophet Muhammad's (PBUH) enchantment incident was not true. He explained that these two suras were revealed to take shelter in Allah specifically from the matters mentioned in the two suras, as well as from all sorts of evils in general, and to teach us how to defend ourselves from them. He also cites the hadith of Ukba b. Amir stated in Muslim on the subject as evidence. It is also suggested that Muawwidzatain was revealed near the end of prophethood with the intention of commanding and advising people to seek refuge in Allah from the evil and sedition of those who claimed prophethood.

As can be seen, some scholars think these suras were revealed in Mecca, while others believe they were revealed in Medina. Those who claim Madinah link this to Prophet Muhammad's enchantment incident. It is possible to choose one of these two views by looking at the narrations.

The virtues of Muawwidzatain are expressed in many hadiths reported from Prophet Muhammed (PBUH). Most of these hadiths were conveyed by Uqba bin Amir. Accordingly, Prophet Muhammad (PBUH) described it as the two best suras for those who seek refuge from Allah. According to Ukbe's account, the Prophet considered these two suras to be unprecedented verses. Furthermore, "whoever reads Muawwidzatain will be like reading all the books that Allah has sent down," according to a hadith. It is reported that Prophet Muhammad (PBUH) ordered Jabir bin Abdullah to read them, claiming that he had never read anything like these two suras before. According to a rumor attributed to Umm Salama, The Prophet described these two suras as the most lovable suras to Allah. There are some hadiths that mention the virtues of only one of Muawwidzatain, as well as some hadiths that mention the virtues of reciting the Surah of Ikhlas along with Muawwidzatain. Prophet Muhammad referred to Surah al Falaq as the most eloquent surah in Allah's eyes in a Ukba narration. The Prophet, along with Ikhlas, described Muawwidzatain as the best of those revealed in the Torah, the Bible, the Psalms, and the Furqan, according to another hadith told by Uqba. It is also said that Ikhlas and Muawwidzatain were considered one-third of the Qur'an by Prophet Muhammad (PBUH). Aisha and Asma bint Abu Bakr also narrated about the virtue of reciting Ikhlas and Muawwidzatain after the Friday prayer.

In his tafsir, Al-Bahrani, a Shiite scholar, also mentions the virtue of Muawwidzatain. As a result, the Prophet told those who read Muawwidzatain every night before going to bed that Allah would write the thawab (reward) of those who fasted and performed pilgrimage or umrah and that he would protect them from all sorts of dangers. Many more hadiths have been reported in this manner.

“whoever reads Muawwidzatain will be like reading all the books that Allah has sent down...”

“when the Prophet wanted to sleep, He would bring his hands together, then recite the chapters of Ikhlas, Falaq and, Nas, then blow it into his palm, then rub it all over his body where his hands reach, starting from his face, head and, front of his body....”

It is stated that while the Prophet used to pray with other prayers, he abandoned them with the revelation of Muawwidzatain and kept reciting ta’awwuz with it. On a dark and windy night, The Prophet was reciting ta’awwuz with Muawwidzatain and told Uqba, who reported the hadith, to do the same. The Prophet, according to the narrations, always read these two suras when he was ill. Furthermore, when a member of his family became ill, he recited the same chapters to them.

According to what is narrated from Aisha, when the Prophet wanted to sleep, He would bring his hands together, then recite the chapters of Ikhlas, Falaq and, Nas, then blow it into his palm, then rub it all over his body where his hands reach, starting from his face, head and, front of his body. When the Prophet's illness worsened and he became unable to practice, he instructed Aisha to do so. Aisha blew into his hands and wiped his body with them after reading these chapters. Again, according to Aisha's narrations, the Prophet did so every night.

As a result, it is understood that the Surah Falaq and Nas are very important for Muslims. Because we, as human beings, need to take refuge in Allah from all kinds of material and spiritual evil in the world throughout our lives and we lack the power to protect ourselves without Allah's protection and assistance. Since Allah Almighty is aware of this, He has bestowed such great blessings on us and has asked that we make it a habit. By making it a habit to recite these chapters in both daylight and darkness, we are also following the Prophet's Sunnah.

In addition to reciting these miraculous chapters, we can enhance the spiritual atmosphere of our homes by displaying them as wall decor. As a result, we appeal both to the eyes and the hearts. IslamicWallArtStore offers a diverse selection of products made of a variety of materials, including wood and metal. Models in various khats, ranging from Kufi Khat Falaq-Nas decors to Diwani Khat Falaq-Nas decors, colors, and sizes are available in the store, which makes a strong impression with Wooden Falaq-Nas and Metal Falaq-Nas varieties. You can visit the store and choose the product that best fits your home's ambiance.